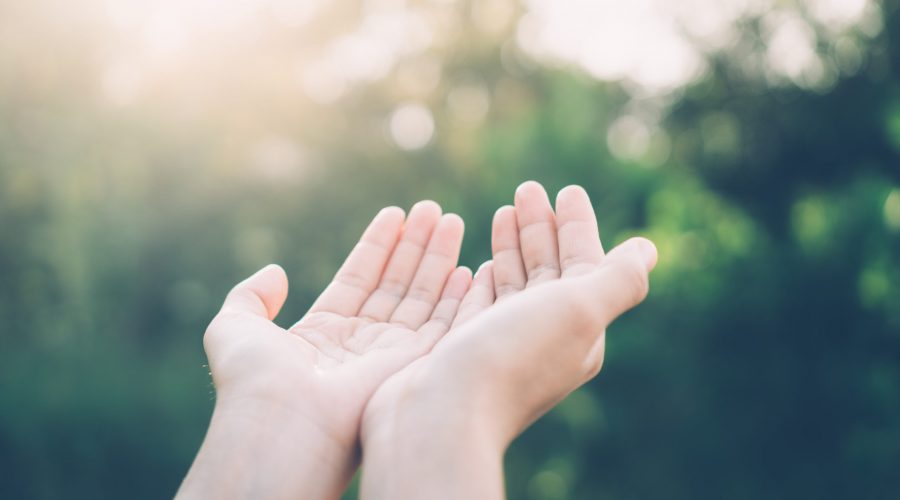 Recently, our curious daughter decided to try her hand at turning on the gas range. Quickly and firmly, we corrected her behavior, doing our best to explain the dangers lurking just above her hairline.

Like any 3-year-old who’s faced a scolding, her embarrassment led to tears and a little pity party—at which point her big brother reached out to try and soothe her. And yet, his kind intentions met with all the fury of a humiliated preschooler.

Understandably, her snappy response hurt his feelings, and this seemed like a good time to describe the concept of grace. We explained that, in her hurt, she responded unkindly to his attempts to comfort her—and while yes, her response was wrong, grace says, I’m going to overlook that and show you love and favor anyway.

Seemingly satisfied with this explanation, our son turned to his sister and said, “Ok, Anni, I’m going to give you grace because you’re upset right now.” But before he could even fully turn to walk away, that precocious little thing lashed out once again, this time swatting at the back of his head.

Apparently, she was not in the mood to receive grace.

Holding On In Fear

Before I could say a thing, he wheeled around, pointed a little finger at her, and declared, “Oh that’s not nice, I’m taking back my grace!”

At that, my husband and I collapsed into peals of stifled laughter and amusement over this dramatic interaction. Kids are nothing if not blunt, unfiltered megaphones of human nature.

And yet, just as quickly as the laughter came, conviction also swept in and squeezed my heart. My son’s honest, transparent response struck a nerve with my own soul, and I had to ask myself the question—how often do I “take back” the grace I extend?

Sure, it may not be as bold as his declaration. No, I’m much more smooth and subtle about it. Instead, I’ll:

Offer a purposefully cool response when I could be warm.

Withhold encouraging words when I have a golden opportunity to extend them.

Decline an invitation to connect with someone who hasn’t received my “grace” as I thought she should.

I wonder if you can relate? Maybe you too are a person who wants to give out grace like it’s candy … but doing so feels a little scary and vulnerable. If you’re like me, you’ll find yourself handing out a conditional type of grace—one with strings and emotions attached to it. What’s worse, we can even use grace as a means of manipulation (ouch, guilty).

And more often than not, we’ll find fear sitting at the heart of this struggle … for what if we give grace and, just as my son experienced, it isn’t received in the nicest of ways?

I love the often-quoted definition of grace as “God’s unmerited favor.” Our Father pours out on us His underserved, unearned esteem. Truth be told, we rarely receive His grace in the way we should, yet He lays it down before us anyway—and leaves it there.

In John 10, Jesus calls Himself the Good Shepherd, who came that we might have life and have it abundantly. He gave us His grace by giving us His very life. In verses 14-15, He declares:

“I am the good shepherd. I know my own and my own know me, just as the Father knows me and I know the Father; and I lay down my life for the sheep.” (ESV, emphasis added)

Jesus didn’t simply lend us His grace—He gave it and let go of it entirely, laying it down without regard to how our broken humanity would receive such a gift.

And gently, sweetly, He calls us into following His lead. We may or may not be asked to lay down our physical lives for one another, but we are all called to put our selfish tendencies to death (which, if we’re honest, can feel pretty excruciating!).

Yes, it’s scary. Yes, it’s vulnerable. Yes, we may offer grace and turn around, only to receive a swat to the back of the head.

But dear one, turning loose of grace paves the way for abundant life to rush in and flood our hearts! Letting go of grace creates room for more peace, more joy, and more security in Him.

Jesus let go of His grace, knowing He was safe in His Father’s Hands … and the same is true for you and me. God can and will care for your heart, even if the grace you give seemingly falls into an unappreciative void.

Today, let’s trust Him with a steadfast, humble faith. Let’s believe His promise that He “opposes the proud but gives grace to the humble.” (Proverbs 3:34) And let’s dare to give grace and let it go for good, knowing the strength of the Holy Spirit will enable us to operate outside our own frail flesh.

The reward is immeasurably worth the risk.